2nd July : We awoke at Base Camp to the sound of Marmots and field mice in who’s territory we had set up camp.

(eek ! just noticed a plastic bottle lying next to the marmot!)

“Mah boyz” were feeling refreshed and strong and ready for an acclimatization walk of approx. 3000ft up the morraine along the shoulder of the mountain. We would do the walk in our mountain boots which weighed a tonne (just under 2kgs) for familiarization. 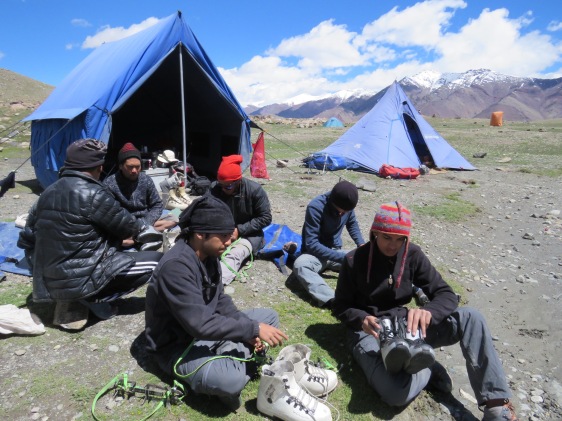 (fitting crampons under the boots – Tejas and Iqbal in the foreground)

Normally the entire climb from BC to summit of approximately 5000ft (7-8 hrs) is done in one go. Climbers leave BC at about 12 midnight, reach the shoulder of the mountain by 2am/3am and then do the snow climb to the summit over the next 4 hrs or so. Arriving at the summit for sunrise between 6 -7 am or 8am on the outside.  The idea is to get safely off the the rather large and exposed snowy massif by 10am or so. Otherwise as the sun beats down on the massif the snow gets mushy, waist deep and difficult to negotiate.

(Top of the brown morraine and dip to the other side was our goal. pic : Tejas)

We started our acclimatization walk at 12 noon and after about 20 mins into the walk in our heavy mountain boots, labouring across morraine, it was clear that this was not working for us! It is the most frustrating, disheartening and inelegant experience to be trudging in mountain boots over morraine! Takpa’s idea was that at 12 midnight, we would not notice the terrain (!) and it was easiest to climb with the heavy boots already on our feet because it would be too cold to change into our mountain boots at 3am just before the snow climb. So according to him it would be best to already be kitted out in heavy boots, harnesses and helmets and arrive atop the shoulder of the mountain and then rope up for the final summit push across the snow. 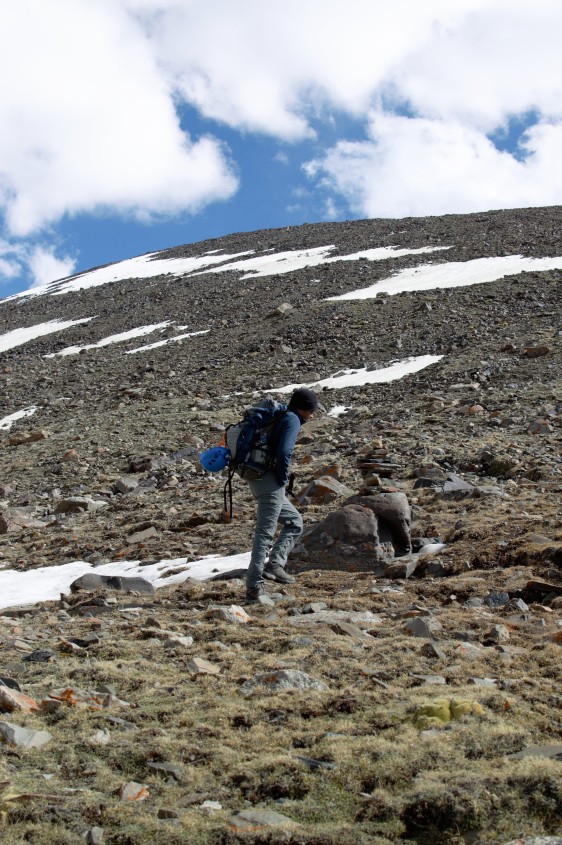 We reached the shoulder top and with very little discussion with the others, I decided that we needed to have an Advanced Base Camp right there. Takpa immediately agreed and said, he had been thinking the same. “Mah boyz” were much relieved with the decision. More so, because their own prior reading about Kang Yatze and others’ experiences had shown that an ABC made the summit push easier.

(Walking up the morraine. pic : Tejas)

We left some of our excess equipment like ice-axes and helmets anchored to a rock and descended to BC. The plan was to bring up 2 tents and a stove with our personal gear the next day to occupy ABC and then make a summit bid.

We returned to BC with a plan. Feeling confident and full of hope and renewed expectations…………..

6 thoughts on “Decision for ABC”

This is a text widget. The Text Widget allows you to add text or HTML to your sidebar. You can use a text widget to display text, links, images, HTML, or a combination of these. Edit them in the Widget section of the Customizer.